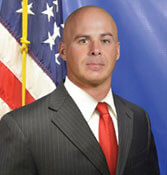 TEAMWORK IS THE KEY TO SUCCESS

Anyone who enters to the lobby of the Saline County Sheriff’s Office (SCSO) will see a large display of our Mission Statement.  The first line of that Mission Statement reads that we will, “Provide an exceptional standard of Public Service at the highest levels of integrity, excellence, and accessibility to the citizens of Saline County.”

As the Sheriff, my number one concern is to keep the citizens, business owners, and SCSO personnel safe.  When I arrived as Sheriff, I quickly realized that we would have to adopt a crawl, walk, run approach to making the SCSO a better department.  A better department would then translate into better service to the community.  After nine months we are starting to walk. However, we have much more to do.  WE being the SCSO and the community as a whole.

Over the past nine months, we have become much more responsive to the needs of the community.

Working within our current budget, we found funding for additional deputy positions and new patrol cars.  We reallocated funds to paint and stripe unmarked units which has significantly increased police visibility throughout the community.  We have altered the shifts of two deputies so there are additional patrol units on the street during peak call times.  We have taken the social media aspect much more seriously than previous Administrations and created a new, interactive, SCSO Webpage and Facebook page.  These are just a few examples of a new and improved SCSO.

Having more deputies on patrol is an important measure to fight crime, however, it is the community we serve, not the Sheriff’s Office, which really makes a difference.  The SCSO has, and will, always respond to 911 calls.  We will react accordingly, but our goal is for the SCSO to be less reactive and more proactive in preventing crime from occurring.

Through a collaborative partnership between the SCSO, the citizens, businesses, and other law enforcement agencies, I am confident that we can make Saline County and even safer place live, work, shop and play.  Our goal is to implement proactive enforcement efforts aimed at the reduction of criminal incidents, rather than responding to them after they have occurred.

Crime prevention requires the active cooperation of all members of the community.  The SCSO is working hard to catch the “bad guys” and put them behind bars, but we are counting on you, the citizens, to work together in the fight against crime.  You, as a citizen of this great county, have an important role.

Saline County is a dynamic community with hard-working citizens who want to be safe.  We need everyone to become involved and be energized in their efforts to protect themselves, family, and hard-earned property.

One way to for citizens to become involved is to report criminal/suspicious activities.  At our website, www.scsosheriff.org, there is a place to report crime tips.  Those crime tips are checked daily and citizens need to know that their opinions/comments are taken seriously and followed-up on.

Additionally, the Saline County Sheriff’s Office has two telephone lines that are checked daily for narcotics information and crime-tip information.  Those numbers are follows:

It should be noted that the SCSO receives a number of anonymous complaints and although we respect a citizen’s right to remain anonymous, we encourage people to identify themselves which would allow us to communicate with you regarding our course of action in solving the reported issue.

One the of the biggest success stories of our social media campaign was the arrest of Gerald “Boggie” Sanders.  After an early morning shooting where the suspect fled the scene and was at large, it was a 7 year-old boy who notified his mother that, “A person on TV looks like the man in our yard.”  Sanders was arrested moments later and the community could sleep sounder knowing that this armed and dangerous suspect was off the street.

As stated in our Mission Statement, the Saline County Sheriff’s Office is committed to being more “accessible to the citizens of Saline County.”   Through teamwork and a more collaborative approach with the citizens, businesses and other law enforcement agencies, we can make Saline County an even safer place.